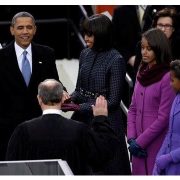 I am writing this report from the steps of the Capital Building in Washington DC, scratching my notes on the back of a commemorative program with a golf pencil, absolutely freezing my buns off.

I am wearing all the warm clothes I own, including my Marine Corps olive winter weight double knit wool officer?s trousers. These were the pants that successfully executed the retreat from the Chosun Reservoir in Korea in 1950 in -40 degree temperatures, and I?m still cold. Maybe it?s my thin California blood. Perhaps they?re trying to keep us on ice until 2016.

House minority leader, Nancy Pelosi, kindly made available an Air Force jet to transport the many San Francisco Bay Area guests to the inauguration. We paid for it, so why not? To navigate the iron clad security, we were ordered to claim our seats three hours in advance. Hence, the frozen vigil. You would think a $6 billion election would at least get us more comfortable seats.

The upside is that I am trapped here with the top 300 people who run the country, including cabinet officials, White House staff, the Joint Chiefs, the entire Supreme Court, and senior members of congress. You can bet that everyone here has the highest-level FBI clearance and background checks. No Homeland replay here. It is all fertile ground for finding new trading ideas for my readers, especially now that politics has become such an important part of the investment landscape.

I?m in the cheap seats, about 20 rows back from the podium. I can see many of the individuals who I have interviewed for The Diary of a Mad Hedge Fund Trader over the past five years. Has it been that long? Chairman of the Joint Chief?s, general John Dempsey, in on my left. The family values champion, Newt Gingrich, is chatting animatedly with his third wife, Callista. Treasury Secretary, Tim Geithner, claims a prime seat in the third row. My own Senator, Barbara Boxer, sits far to the left of the president. Holy moly! There sits The Man from Uncle, David McCallum. What?s he doing here?

Spread out below us is a vast crowd of fans, estimated at 800,000. It is a festive, party like mood, with many moving foot to foot to stay warm. A half dozen massive jumbotrons line the Great Mall. It is really quite impressive to see masses of people as far as the eye can see. The last time I saw a crowd this big was in the early 1970?s at Beijing?s Tianamen Square, where a million identically dressed screaming Chinese waved little red books and listened, enthralled, to chairman Mao Zedong speak.

Last night, I attended the Red, White, and Blue Ball for the military, the first of 13 such events the president must attend, as it was the easiest for me to get tickets. Barack and Michelle performed the opening dance. Then they switched partners, the president dancing with a young Navy ensign, while Michelle embarrassingly towered over a decorated Army sergeant.

The great revelation here is that the Commander-in-Chief can?t dance worth beans. That?s the consequence of spending too much time poring over law books, and not enough at the Arthur Murray Dance Studio. (slow-slow-quick-quick!).

The administration took advantage of every opportunity for symbolism. Supreme Court Chief Justice, John Roberts, performed the official swearing in within the amply warmed White House on Sunday. His vote decided in favor of Obamacare, the president?s signature achievement during his first term.

The message of Obama?s second inaugural address couldn?t be clearer: No more Mr. Nice guy. He won the election, was never going to run for office again, and it is going to be all hardball from now on. The politician in the next seat told me that he was going to take several more runs at the wealthy, this time on deductions. The carried interest provision, which lets the rich pay only a maximum 15% rate on their earned income, was toast. It looks like I will have plenty to write about during the coming four years. The few Republicans in attendance wore universally sour expressions.

When the ceremony broke up I shouldered myself to the front of the crowd to find Obama?s sole Supreme Court nominee, Sonia Sotomayor. I managed to get her to agree to meet me for lunch in San Francisco next week. I will write that interview up, if I can tear myself away from furiously writing Trade Alerts for this unrelenting market.

I then nudged my way over to say hello to my old friend, former CIA director, Leon Panetta. I complimented him on his portrayal in the Oscar nominated film, Zero Dark Thirty, when he ran the agency during the Osama bin Laden assassination. Does this presage a future career in Hollywood?

He said no, he was retiring for real to his California walnut farm, where he would deal with a different sort of pest. I sympathized, as I owned 20 acres of chardonnay grapes in the next valley over from his spread, near the tiny agricultural hamlet of Gonzalez. Watch out for those glassy winged sharpshooters! I thanked him for the time he permitted me over the years. He responded that the nation was grateful for my year of assistance and insights. Wow! That accolade alone was worth the trip.

On the way out, I was handed a bag of tchotchke to end all. It brimmed with yet another commemorative program, a framed invitation to the inauguration, a pair of gold-rimmed Champaign flutes, cuff links, a lapel pin, souvenir pens and pencils, and a ?2013 Inauguration? baseball cap.

The flight home was not as glamorous as the one on the way out. The C-130 Hercules out of Andrews Air Force Base was not exactly designed for comfort, with everyone strapped in by five point harnesses. So I meandered up to the cockpit and asked the captain, who was old enough to be a grandchild of mine, if he could give a little flight time to a retired Desert Storm pilot. Without hesitating, he said, ?Yes Sir?, and motioned to the copilot, who handed me his headphones and jumped out of his seat.

I flicked off the autopilot, and put the old bird through some gentle, lazy turns. The avionics were amazing, like something out of Star Trek. If we only had this stuff 20 years ago, I might not be missing a disk out of my back. I then proceeded to fly 100 of my neighbors across the Rockies, to Travis Air Force Base and home.

Bonds are Breaking Down All Over
Scroll to top