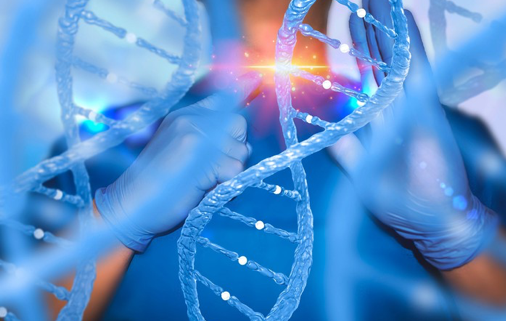 Occasionally, I discover a piece of research from one of my other Mad Hedge publications that is so important that I send it out to everyone immediately.

Today piece from the Mad Hedge Biotech & Health Care Letter is one of the instances. It makes the case and provides the numbers as to why Biotech & Health Care will be one of two dominant sector to follow for the next decade. It also is a key plank in my argument for a return of a new Golden Age and a second “Roaring Twenties.”

Biotech investors, take note: 2019 was a great year for the industry, but the best is yet to come.

In the final three months of 2019, the biotech sector grew by 32% — notably outpacing the pharmaceutical industry, which only recorded a 9.5% gain.

However, the biotechnology sector is estimated to grow substantially in 2020, and reach over $775 billion in revenue by 2024 as more and more treatments for previously incurable diseases get discovered.

Looking at all the progress in the biotechnology space, this could even be the year we’d finally discover the cure to many life-threatening and debilitating conditions like cancer and Alzheimer’s disease.

With all these technological advancements, two revolutionary tools have been overhauling the entire biotechnology and healthcare industry from the ground up: precision medicine and CRISPR. Actually, the impressive growth of the biotechnology industry has been largely attributed to the excitement generated by the gene-editing sector.

While the majority of companies concentrating on the human genome are still in the research phase, the growth of this industry is undeniable.

Just 20 years ago, reading all the DNA of a single person cost approximately $3 billion. Now, this price is down to only $1,000. In the future, this number will go even lower at $100. There are now gigantic factories in China sequencing DNA for companies like Ancestry.com and 23andMe.

This is just one example of how the biotechnology industry has grown by leaps and bounds. It’s also the reason behind the surge of CRISPR shares.

In effect, the specialists in this niche, including Crispr Therapeutics (CRSP), Bluebird Bio (BLUE), and Editas Medicine (EDIT), are amplifying their efforts in 2020.

Among the specialist companies, CRISPR Therapeutics is considered as one of the frontrunners — if not the top stock. This is because compared to its rivals, which are still in preclinical phases of development, CRISPR Therapeutics’ already has two drugs going through Phase 1 trials: CTX001 and CTX110.

The promising results of the company’s research resulted in a 113% rise in shares last year, with the bulk of the surge starting in October. In fact, CRISPR Therapeutics’ performance had been so impressive that its market cap reached $3.4 billion.

Meanwhile, CTX110 is a CAR-T treatment. The process involves the extraction of immune cells from the patient. These are then retrained and later re-introduced to the human body.

CRISPR Therapeutics’ CAR-T treatment is anticipated to be offered at a cheaper price compared to the other CAR-T therapies.

Both Novartis (NVS) and Gilead Sciences (GILD) are pursuing the same treatment. However, the cost of the therapy from the latter two is expected to reach as much as $475,000 for every patient annually.

If both phase trials succeed, these will bring massive home runs for CRISPR Therapeutics, especially since the cancer immunology market is expected to reach $127 billion by 2026. Over the next 10 years, this niche is estimated to reach $25 trillion in sales.

Among the gene-editing treatments under development today, CRISPR is projected to grow tenfold in the number of applications and potentially curing 89% of disease-causing genetic variations by 2026.

Hence, further success with CTX001 and CTX110 along with additional treatments in the drug pipeline would all but guarantee that Crispr Therapeutics could beat the market again in 2020. 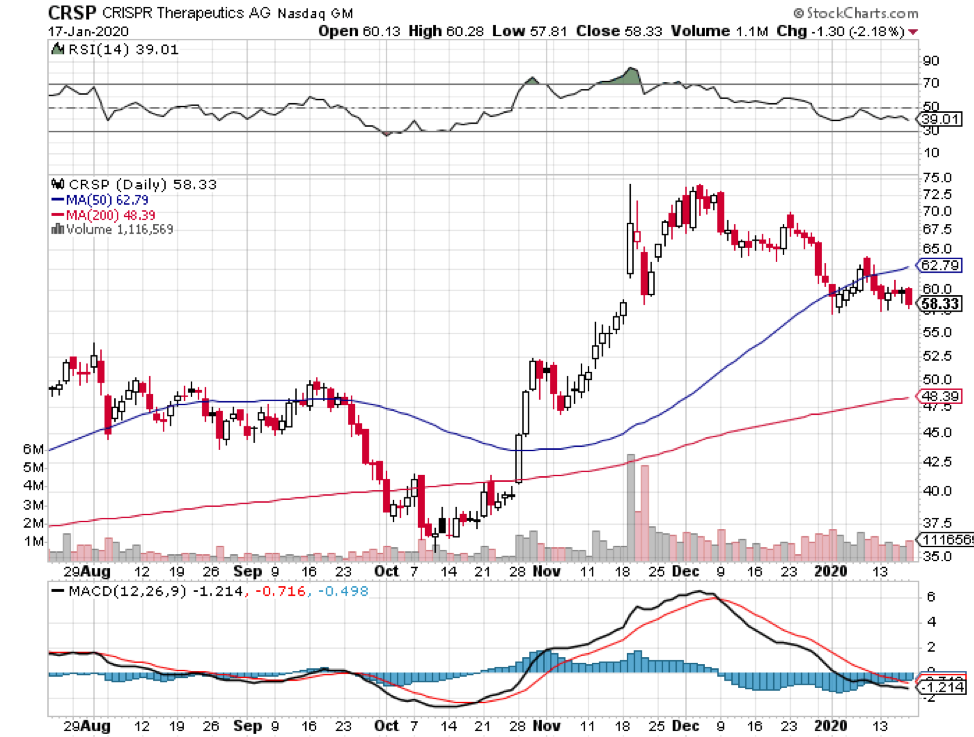 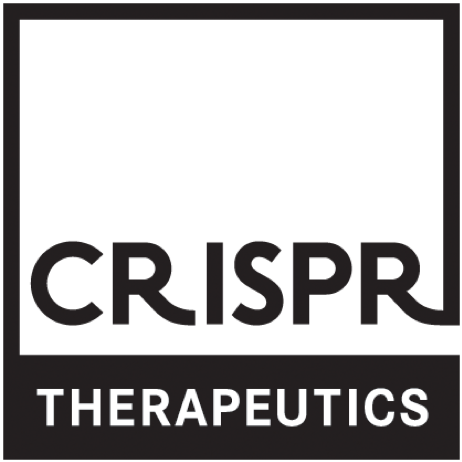 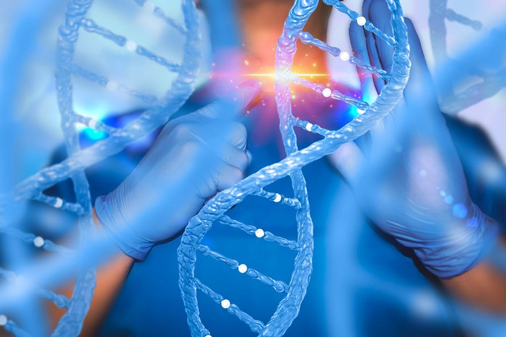 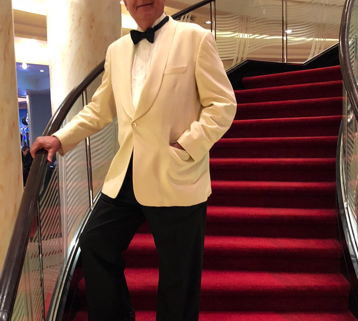 A: It’s tempting; I’m waiting to see if we take a run at the $250-$260 level that we saw at last October’s low. If so, it’s a screaming buy. Tesla is one of a handful of stocks that have a shot at rising tenfold in the next ten years.

Q: CRISPR stocks are getting killed. I know you like the science—do you have a bottom call?

A: What impacted CRISPR stocks was the genetic engineering done on unborn twins in China that completely freaked out the entire industry and killed all the stocks. That being said, CRISPR has a great long-term future. They will either become ten-baggers or get taken over by major drug companies. The first major CRISPR generated cure will take place for childhood blindness later this year. The ones you want to own are Editas (EDIT), Intellia Therapeutics (NTLA), and CRISPR Therapeutics (CRSP).

Q: Do you ever reposition a trade and add contracts?

A: I very rarely double up. I’d rather go on to a new trade with different strike prices. A bad double up can turn a small loss into a big one. Sometimes I will do a “roll down,” or buy back one spread for a loss to earn back that loss with a spread farther in-the-money.

Q: For us newbies, can you please explain your trading philosophy regarding purchasing deep in the money call spreads and how that translates to risk management?

A: I did a research piece in Global Trading Dispatch yesterday on deep in-the-money call spreads, and today on deep-in-the-money put spreads. The idea is to have a position where you make money whether the market goes up, down, or sideways. Your risk is defined, and you always have time decay working for you, writing you a check every day. Here are the links: Vertical Bull Call Spread and Vertical Bear Put Spread.

A: Number one: interest rates go down—if we go into recession, rates will fall. That wipes out the principal value of the security. Number two: with corporate debts, you run the risk of the corporation going bankrupt or having their business severely impacted in the next recession and their credit rating cut. It’s far safer to invest in a bank deposits yielding 2-2.5% right now. Some smaller banks are offering certificates of deposit with 4% yields.

Q: What are your thoughts on the British pound (FXB)?

A: I think Brexit will fail eventually and the pound will increase 25%; so play from the long side on the (FXB). It would be economic suicide for Britain to leave the EC and eventually people there will figure this out. If the Brexit vote were held today, it would lose and that may be how they eventually get out of this.

A: Yes, it’s back on again. I expect we will visit $112 in the (TLT) sometime this year, down from the current $121. That brings us back up to the 3.25% yield on the ten-year US Treasury bond. That is down nine points from here, so it’s certainly worth taking a bite out of.

A: At the top of the next equity market run. It rose a whopping 10% during the December stock market meltdown so that gives you a taste of what can happen. Junk bonds are called “junk” for a reason.

A: Take profits now and buy back on the next dip. If we dip 5%-10% in gold, that would be a good entry point for a larger move later on in the year. To get a real move in gold, we need to see real inflation and that will eventually come. Another stock market crash will also gain you another 10% in gold.

Q: When will the government shutdown end?

A: I think it will go a lot longer than anyone realizes because Trump needs a deal worse than the Democrats do. Trump is basically saying pay for my wall or I’ll keep shooting another of MY supporters in the head every day. The Democrats can wait a really long time in that circumstance. Trump’s standing in the polls has also collapsed to new lows. By the way, the Chinese are using the same approach in the trade talks so that could be a long wait as well.

Q: There’s been a big shift in the MHFT Profit Predictor in the last 30 days—does this mean we should not be adding any positions?

A: Absolutely; this is a terrible place to be adding any new positions. The index went from 2 to 57 which shows you how valuable it is at calling market bottoms. Now we are at the top end of the middle of the range. All markets are now dead in the middle of very wide trading ranges which means the best thing you can do is take profits on existing positions, which I have been doing. Or watch Duck Dynasty and Pawn Stars replays. As for me, I am an Antiques Roadshow guy.

Q: What percentage should you be invested in the market now?

A: I’ve gone from 60% to 30% and have only 3 weeks left on my remaining position. I’m looking to go 100% cash as long as we’re stuck in the middle of this range. Better to sit on your hands than chase a high risk/low return trade.

Did I mention that we have had the best start to a New Year in a decade? 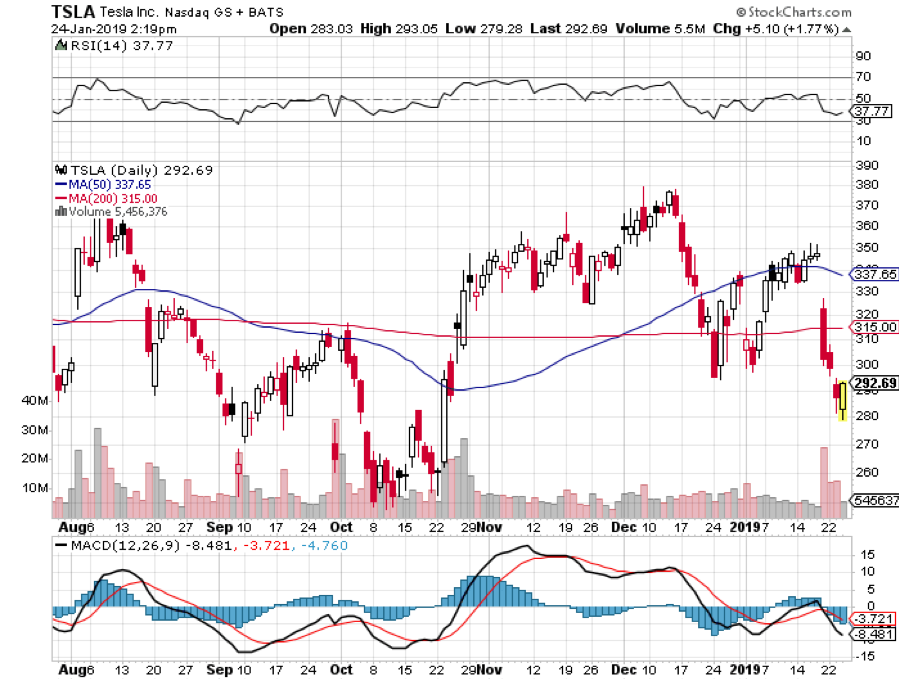 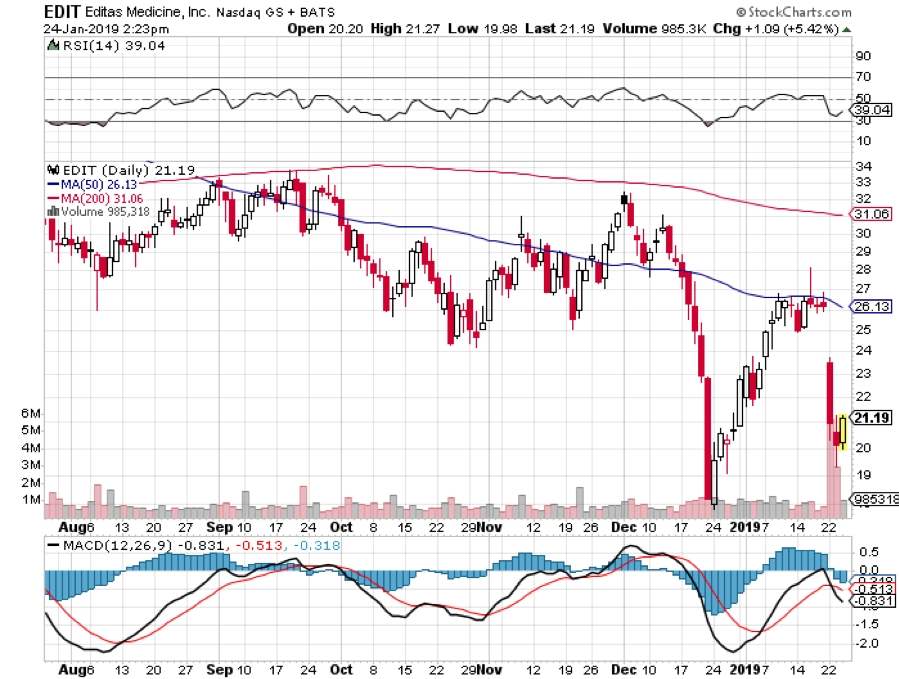 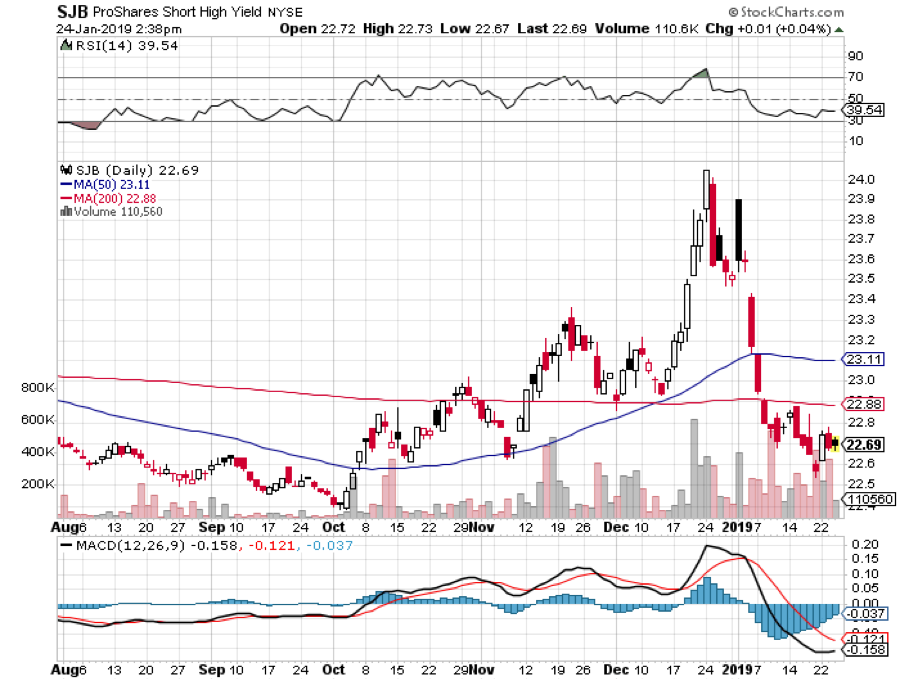 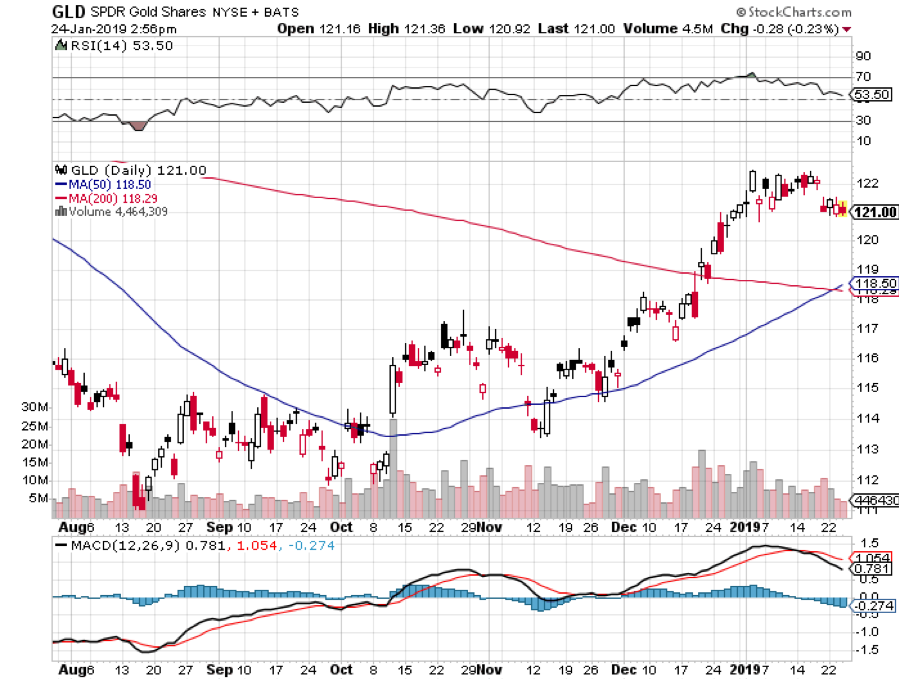 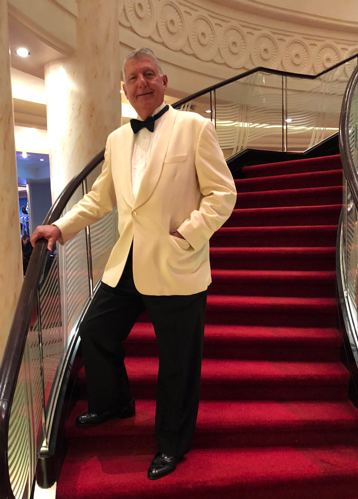