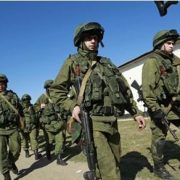 It was another one of those midnight calls from my old KGB friend.

Yuri was assigned to tail me in Tokyo during the 1970?s. He even came to my wedding as the official TASS correspondent. We have stayed in touch ever since. After the fall of the Soviet Union, he landed on his feet (as did his buddy, Vladimir Putin), eventually ending up in the hedge fund industry.

Yuri told me that Moscow had just dispatched another 6,000 heavily armed troops to its naval bases in Crimea, part of the Ukraine, and more were on the way. There, Russia has long-term leases; much like the US still has a presence in Guantanamo, Cuba. It is a crucial defensive arrangement that gives Russia access to its only all year, warm water ports.

The markets certainly voted with their feet, belying Russia?s important role in the global economy. A shooting war in the Ukraine would block the oil terminals for Russia?s largest export, choking off a principal source of revenue for the government, prompting Brent to pop $2.50. This is why Hitler invaded the region in 1942. It was all about energy, as it always is.

That will certainly be welcome news in Moscow. Indeed, boosting the price of Russia?s largest earner is seen by many as the principal impetus for the aggressive military move. That?s good for Putin, but bad for us.

You also saw higher prices for natural gas, another huge export from Russia to Europe, where the pipelines also cross the Ukraine. But gas is not an internationally traded commodity, just a collection of disparate local markets, so the impact in the US will be minimal. The coming spring is the big issue for this market.

Wheat, however, is another story. The Ukraine is one of the world?s principal grain exporters. This is why Napoleon invaded Russia in 1812. Take Ukraine out of the market, and several Middle Eastern countries quickly go hungry.

They certainly figured this out quickly in the Chicago pits, where prices (WEAT) rocketed by 5%. The move caught many traders short, who were anticipating a continuation of the three-year bear market.

Of course, stocks everywhere were trashed, especially the Market Vectors Russia ETF Trust (RSX), which dove by 17% since the crisis began two weeks ago. Normally, the (RSX) rises in tandem with appreciating oil prices. But nobody cares, as emerging markets (EEM) have been out of favor for some time, and once again are one of the worst performing asset classes in 2014.

Knowing that my friend has a strong history bent, as I, I asked if we were heading into a second Crimean War, Russia having won the last one in 1856 (remember the Charge of the Light Brigade?). Worse, is World Way III on its way? Russia still has 8,800 nuclear weapons, compared to our 3,500 (we bought their other 6,000 to run our nuclear power plants after the fall of the Soviet Union).

Not a chance, he replied. There is a reason why Russians are Grand Master chess players. The entire reason behind the crisis was to preserve Russia?s interests in any new Ukrainian government, the last one having just scampered off to collect on their Swiss bank accounts.

Be nice, and the troops go home. Be not so nice, and there will be a massacre, with Russia the overwhelming winner. Ukrainian troops are wisely confined to base, and there is no movement of Russian ships whatsoever. The signs of escalation are nowhere.

All of my contacts in Russia tell me that the chances of war happening are nil. Russia has such an overwhelming military advantage that this is a conflict that will be solved by writing checks, and not pulling triggers.

Remember, Russian leaders are all about projecting strength and are great at bluffing. (During the 1962 Cuban missile crisis, Nikita Khrushchev possessed only four operational atomic bombs). This is why Clint Eastwood is such a big movie star there.

Unfortunately, the Ukraine traded off all of its nuclear weapons in exchange for European security guarantees, which today are not worth the paper they are written on.

It all amounts to a storm in a teacup if you live anywhere but the Ukraine. The real concern is what Putin will do next. Thus emboldened, he may pick off another former Soviet Republic. This goes down very well with his domestic, nationalist base, which is still angry over their loss of the cold war.

If Putin continues his expansionist military policies, it could eventually lead to a return of the cold war. That would be a huge buzz kill for our bull market in stocks, as the peace dividend goes up in smoke and our economy returns to a war footing. At the end of the day, that would come straight out of corporate earnings, and your pockets.

Fortunately, a new cold war is highly unlikely. The last one drove the Soviet Union into bankruptcy. In the end, we outspent them to death. Our credit card was bigger than theirs. A much smaller Russia isn?t going to rejoin a losing game. America?s military has grown dramatically since then, with the increase almost entirely financed by China. Russia?s military virtually no longer exists, and no one anywhere is willing to bankroll a new one.

What this means for out markets is that no matter how ferocious today?s action, it is only a temporary event. It is curing an overbought condition is risk assets everywhere. After the usual over leveraged stop loss selling, it won?t take long for stocks to resume the upside, and bonds to take another dump. For more detail on how and why this is going to play out, please read yesterday?s letter.

I told my friend, Yuri, thanks and said I owed him another bottle of Stolichnaya vodka. By the way, how is the weather in Crimea in August? I hear beach house rentals there have suddenly gone begging.